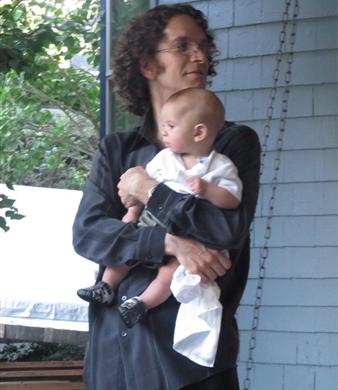 A Moose in Squirrel Hill

Jonathan "Bull" Weinkle is pictured at left in a reflective moment - either that or he is trying to hear what one of his older two children is screaming to him from too far away to hear.

A primary care doctor by day, the self-styled Moose in Squirrel Hill has been dabbling in singing and songwriting for years, under the influence of, among others, Nathan Rogers, Nanci Griffith, Martin Sexton and others.  He credits and blames Camp Young Judaea - Midwest for creating this persona and encouraging him to keep singing (and paying him to do it!).

Jonathan is a life-long Pittsburgher but has lived (and sung, and songwritten) in Israel (including the infamous Dira 18, and the slightly less infamous but much smokier Beit Batya - blame the neighbors) and Philadelphia(don't get him started on the neighbors there, but the neighborhood as a whole was nice and crunchy).  He now lives directly on top of a tunnel, the very tunnel his uncles watched being built when they were kids.  He has an incredible wife and three equally incredible sons and sometimes goes days without embarassing any of them.